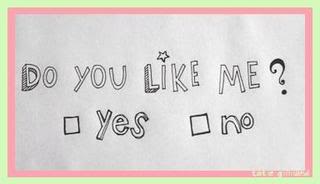 Secretly, or in my case not so secretly, we all wish that relationships were as simple as they were in 5th grade. Someone passed you a note with very convenient check boxes while someone four seats to the right and up two awaited the answer to that timeless question: Do you like me?

For as much as we accuse ourselves of immaturity in thinking that a checklist should be the best way to determine attraction, there was directness in this method that is blatantly lacking in all of our interactions since. There is bravery in passing a note like that because no matter which box is checked the entire class is going to know about it as it makes its way back, and the entire school is going to know by recess. Reputation is really the only thing that hangs in the balance at that point, since even if the answer is yes the best you can hope for is someone to share your Little Debbie cupcake with- and who honestly wants to share their cupcake?? But the principle stands. Whether it’s the girls out to lunch, or the boys over beers, everyone is saying to their friends “I have no idea what’s going on. What the hell does he/she want?” And all of this confusion would be much simpler if we all started with a basic statement of interest.

There is even confusion in the discussing of anonymous notes. I walked up to the host of a restaurant just as someone from the kitchen passed him a note. He seated me and asked how I was, to which I replied, “I’m good, no one is passing me secret notes, but it’s still been a pretty good day.” It could have very satisfactorily ended there, but no. He said, “If it was from a nice blonde instead of Juan it would make my day, too.” And with that conjecture over whether he meant me, or blondes in general or only meant to express the general ennui of being a host began. Granted, I’m more oblivious to subtleties of intention than most people (I’m usually the last to know if someone is hitting on me), but how is anyone supposed to know when flirting is innocent as opposed to a means to an end. I have been through enough sorta, kinda, I-guess-you-can-sort-of-look-at-it-that-way relationships to realize that you probably wouldn’t get a yes or no answer even if you asked for one, but it’s nice to think about.

The root of the problem is that no one really knows exactly what they want, and even when they think they do, they’re usually wrong and end up doing something completely contrary. Which is what makes the art of predicting other peoples nonsense, as well as your own, a fruitless exercise. Even knowing that a checklist would only be a stop-gap solution, I would most likely do it anyway; a few hours peace of mind is better than none. I, personally, have been on the precipice of employing a more comprehensive checklist with more questions and possible answers, but it began to take on shades of standardized testing- kind of sucks the romance out of things, not to mention the sincerity.

More often than not I’m fairly certain all of us would answer “Maybe so” if asked whether we like someone (or if we like like them) because liking someone and figuring out how much of your time you’re willing to spend around them is an ongoing decision. Figuring out your own crap is hard enough, much less trying to mush it together with someone else’s. You don’t go sharing your cupcake with just anyone.